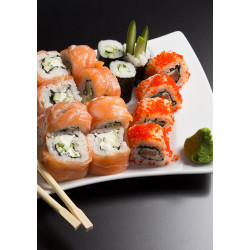 Funchoza
Cellophane noodles are a type of transparent noodle made from starch (such as mung bean starch, yam, potato starch, cassava, canna or batata starch) and water. They are generally sold in dried form, soaked to reconstitute, then used in soups, stir fried dishes, or spring rolls. They are called "cel..
$14